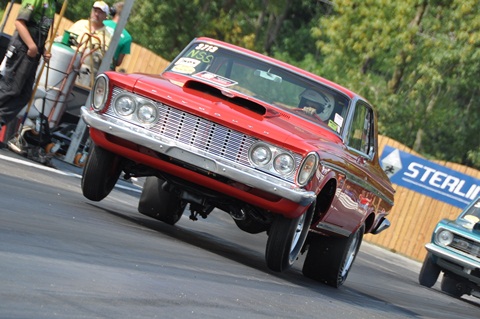 Overall I had a very good and lucky year.  After starting out in the first race going out in the first round, it wasn't real promising.  But even that was fun racing with this group.  I also had some bad luck with my throttle linkage failing at Eddyville putting me out, and blowing the engine at the NMCA/Victory NSS shootout, it was still fun.

My luck did turn when the new engine settled down and ran consistently after about 10 passes, and we raced on from there.  It was pretty interesting going into the last race with a number of people that could take first place, all depending on how they and the rest of the gang ran.  But once again I had the luck on my side and I came out on top.

I am so fortunate to be able to run with this Victory NSS family.  I have said this many times before, this is so much fun with this group, I would race for bottle caps, just let it be with this gang.

I was learning to drive in my mom's '64 6 cylinder Chevy which lacked power and rode around as if you were sitting on a marshmallow.  Then my Dad got a 66 Plymouth Fury 383 as a company car and after driving that I was impressed. It was fast and it handled. And then the neighbor took me to the drag strip one weekend as a spectator and after seeing all those mopars in the pits was just the topping on the cake, hooked for life. My first car was a 383 '63 Dodge and I ran that car hard.  I learned alot about automotive engineering from that car as everyday it was a guess as to whether that car would start or not.  After I rebuilt the motor the car was the only one on the whole block that started on a -32 degree day!  I Jumped a bunch of folks that day!

I am running a 1963 Plymouth Sport Fury from Arkansas, literally an older lady one owner car.  The 63 body remains uncut, with no light weight panels other than an aluminum front bumper to loose some weight off of the nose of the car.  The original 318 was changed over to a 440 and an original stage III manifold, which put the car in the 12.0 class.  I have since put in a 500 inch motor, and now run into low-mid 11's.   Out back  I am running  slightly narrowed  9 inch rear with 4.10 gears and 28 X 10.50 tires.