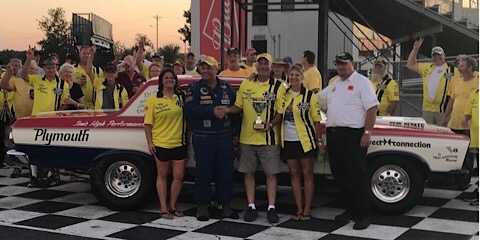 My drag racing began in the early 1970’s.  As a spectator, I went with some friends to a race in Wentzville, MO.  After that, I was hooked and knew I had to participate as a racer myself.  So the adventure began…..I took my daily driver to race at Wentzville.  It was a 1963 Dodge, 4-door sedan, 318 motor, with a 3-speed manual (Itook outthe factory automatic).   Several years later, I retired the 1963 and started racing my next daily driver which was a 1970 Roadrunner, 440 6-pack, which eventually ranin the mid to high 12’s.  In 1982, still at Wentzville, I won the points championship.  It came down to the final round of the last race of the year.  How exciting!

​I have always liked the early b-body Plymouths.  In the spring of1986, I found a 1965 Plymouth Belvedere I, which is my race car today.  It was an original white car, with a very solid body and minor rust, which I purchased for $50.  Of course, I took several pictures of my new project.   One day, sitting around with some buddies (and some beer), I decided to start working on ideas for a car name and color scheme.  So, using colored sharpies on lots of 8” x 10” pictures I had of the car, the designing began.  After many beers and several attempts, the “American Muscle” name and paint scheme were born.  Immediately, in the winter of 1986, I converted the 1965 to a race car.  I did all the work myself,including the paint, except for the hand-painted lettering.  The 1965 was ready to race in the spring of 1987, using the 440 6-pack out of my 1970 Roadrunner.  A few years later, I ran a 440 with a single 4-barrel.  Starting in the late 1980’s, I ran in several NSS associations and nostalgia races including “Muscle From the Past”, “MAR Nostalgia Drags”, “Muscle Car Reunion” and others including competing against the late Roy Clark.  In 1996, I finally moved up to what I always wanted for power, a “Hemi”.

In 2009, with the inception of the Victory series, I knew I found my home.  Through all the Victory series years, I have only missed one race. This series gives me a place to satisfy my need for speed and also a place for fellowship and camaraderie.  The evenings after the race are often as fun as the race itself because of the great group of racers we have.  There wouldn’t be a Victory NSS Series without all our great sponsors and especially Dennis Mothershed, Victory Performance Parts.  And, thanks to Chris Schneider, our Victory NSS Series Racing Director, for all he does to schedule our events and coordinate all the behind the scenes details.

​After having a great ending of my2017 race season at Indy, I had a feeling that maybe 2018 could be my year to shine.  The 2018 racing season started off with a strong semi-finish at Gateway then the following 4 races I went 3-4 rounds each, which put me deep in the championship hunt.  I rolled into the final race at Gateway with high hopes but knew there were 4-5 racers that could possibly pass me in points.  As always seems to be the case, the championship came down to the final rounds of the year.  2018 was no different.  With the tough competition, I, along with other top contenders, went out early.   When the smoke cleared and the points were tallied, I took the points championship by less than one round of competition.  Even though I didn’t win any races throughout the year, my consistency paid off in the end.  Winning the 2018 Victory NSS Series was the crown achievement of my racing career thus far, but I am not done yet.  See you in 2019.  “We Are Victory NSS”!